Nuova Simonelli is a maker of premium commercial and home, semi automatic, automatic and super automatic espresso makers. The company and it’s ownership, The Simonelli Group, are headquartered in Italy

Victoria Arduino began in the espresso business in 1905 and  Nuova Simonelli began manufacturing espresso machines in Italy in 1936.

The company was an early innovator in ergonomic espresso machine design. They are known for the Official World Barista Championship machine. They also have won the Compasso d’Oro for their designs.

In addition to espresso machines, the company designs and manufactures coffee grinders, panini grills, bar dishwashers and other products.

All Simonelli espresso machines are unusual because of three factors. First, all their systems share a common set of similar base technologies including their boilers which means that their home machines have top quality commercial brewing.

Simonelli is one of the few companies to offer copper boiler machines that are economical enough for small offices and, admittedly affluent, home baristas. Copper offers significant benefits over stainless steel boilers and Thermoblock systems. 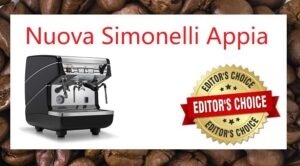 The Nuova Simonelli Appia won our 2020 Editor’s Choice Awards and received an exemplary rating. However, it isn’t for everyone so read our full review for more. 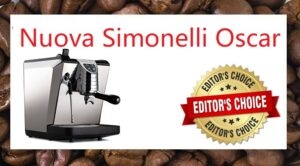 Editor’s Choice winner 2020. Nuova Simonelli makes commercial machines that can handle all the demands of a restaurant or espresso bar. The Oscar is refined enough to find it’s way into your home. 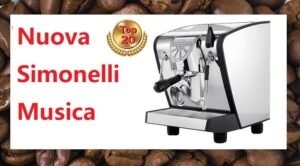 A True Commercial Espresso Machine You Can Own This Nuova Simonelli Musica found that, while it was designed for commercial use, it fits just fine in a (very fine) home, a (very lucky) office or small business. As a result it earned a list on our Editor’s Choice list. Nuova Simonelli products are different than […]