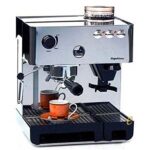 If you are considering a La Pavoni Espresso Machine then I assume what you are looking for is authenticity and the very best in quality. People are attracted to the PA-1200 Napolitana because it is the real deal. For less than $800 you get a brass boiler, commercial looks with a stellar brand. But, unfortunately the recipe for success is missing a few things.

While we understand this we think you are better looking at other automatics. Nuova Simonelli earned three spots on our Editors Choice list because you get all that but you also get some things that the La Pavoni PA-1200 Napolitana doesn’t deliver.

The La Pavoni PA-1200 Napolitana is complicated to buy, use and service. Although its espresso brewing technology is top notch there is just more to owning an espresso maker than that. Also, with some long brews we didn’t see the consistent quality that you expect in this level of machine.

There is a lot to like here. The PA-1200 Napolitana has a brass boiler and that is one of the key attractions. Plus it’s pump delivers 16 bars of pressure. It also has stainless steel baskets, a built-in conical burr grinder a 100 oz water reservoir and removable drip trays.

But the La Pavoni PA-1200 Napolitana just is not as good as a Nuova Simonelli Oscar. Yes, the Oscar is more expensive than the Napolitana but it is still a better purchase that could end up costing less in the long run.

For most people, a La Pavoni PA-1200 Napolitana isn’t the right type of machine. One of the 20 Best Super Automatic Espresso Machines are probably a better choice for you.

La Pavoni Napolitana is not an easy machine to own and operate. There are a lot of issues with service, documentation and use that we recommend considering some alternatives.

The most expensive espresso maker is the one you don’t use. So be really certain before you buy this La Pavoni Espresso Machine.

To get the most out of the Napolitana you need to take ownership over the quality at all stages of the drink cycle. This is fine if you are a barista but from grinding and tamping to settings and extractions and milk handling, this makes the La Pavoni Napolitana espresso machine ask more from you than most people are really prepared to give.