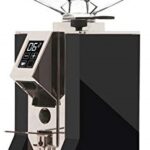 The Eureka Mignon Specialita delivers on its promises. This premium standalone grinder delivers flawless consistency in grind dosing and coarseness. It will handle any level of coarseness you should need, and it is also extremely durable and requires little cleaning or maintenance.

In fact, the burrs should last most people a lifetime. Finally, the Specialita is noticeably quieter than other models.

We first looked at the Specialita about a year ago. The first thing you notice when unboxing it is that it is compact and feels very sturdy. It almost looks and feels like a commercial product. Initially we concluded that the main advantage of the Specialita is that it is quieter than older generation models.

It has a very classic look, which also means they have not moved to LED displays or digital controls. The machine is attractive and compact with attractive chrome elements.

At first, we were not sure about the circular knob control which controls the coarseness of the grind. But after just a few uses we now believe this is the ideal type of control. It allows for extremely fine levels of adjustment and makes it hard to set it incorrectly.

Once you determine the best grind for your preference and method of coffee or espresso brewing then the Eureka Mignon Specialita will deliver that flawlessly every time. It has a simple, pushbutton control and a removable and adjustable portafilter guard.

You can tell how good a grinder is by looking at very coarse grinds. We made several very coarse batches for a French Press and examined the grinds. At that level, you can see variations in the shapes but the general size of the grinds is much more consistent than other grinders. It also has a mechanism that breaks up the clumps. So you get much less clumping other than most grinders.

Many great super automatic espresso makers come with built in grinders. This is better than what you get, even in a great machine. So, if you want to take your brew to the next level, consider a standalone grinder like the Specialita. We do think it should hold more beans. It has a 10-ounce bean hopper.

Eureka Mignon Specialita was designed to be extremely easy to use, clean and maintain. It should last you a lifetime. It has 50mm flat carbon steel burrs which should last ‘forever.’ They are reportedly designed to grind 2,200 pounds of coffee which is over 70,000 espresso shots. That’s well more than three shots a day for 50 years and you are paying roughly a penny to grind every 10 shots.

We give the Eureka Mignon Specialita a strong buy rating. It is under consideration for out editor’s choice award as well. It does everything nearly perfectly and should last you a lifetime. If you want other options then look at our list of coffee grinder reviews and take a look at our Rancilio grinder comparison for another option.

We do not take any money from manufacturers and our reviews and recommendations are independent. As an Amazon Associate I earn from qualifying purchases.