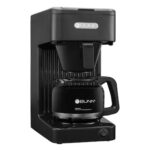 All three BUNN coffee maker lines shares some things. The BUNN Velocity Brew, BUNN Speed Brew and BUNN Heat and Brew lines all have commercial quality stainless steel water tanks, they all agitate and spray in similar ways and they all heat the water to about 200 degrees.

The BUNN Velocity Brew and BUNN Speed Brew heat the water continuously so they can brew coffee very fast. The Velocity Brew can brew a pot in around 3 minutes. The Speed Brew extends the time that water is in contact with the grounds which adds about a minute but gives the coffee a fuller flavor. The BUNN Heat and Brew takes up to 10 minutes for a full 10-cup pot. This is mainly because it heats the water when you start the brew cycle.

We make a big deal about the heating tank on espresso makers, with lots of talk of boilers vs Thermoblock. Each BUNN speed Brew coffee maker is made with a commercial grade stainless steel tank. This is not to say they are the only company to focus on this. The Technivorm Moccamaster uses a copper tank, and brews to 200 degrees but costs a lot more.

As you will see in our BUNN coffee maker reviews, our top recommendation is the BUNN Speed Brew Elite.

We like the Velocity coffee makers, but think the Speed Brew models make better coffee.

We recommend skipping the BUNN BT Velocity and the BUNN NHS models and jumping to the Speed Brew section.

The main feature of the Velocity BT is the thermal carafe. We were not impressed with it.

Even though it is double wall, vacuum insulated, it only keeps coffee warm for up to 2 hours. For the price you would be better buying a Mr Coffee Thermal Coffee maker.

The Velocity BX-D is engineered for elevations over 400 feet. It is very stylish and the best looking BUNN Velocity Brew coffee maker. It is 13.8 x 7.1 x 14.3 in

The GRB is also a 10-cup Velocity coffee maker. If you are sold on a Velocity Brew, then this would be the best model. We recommend this over the BUNN NHS Velocity Brew 10-cup home coffee brewer.

The BUNN GRB Velocity brew is a very good Velocity coffee maker, cheaper than the BT or BX-T it has the same brew features and nice styling.

Buy this model if you are looking for a white BUNN coffee maker. It is a very nice, crisp color of white. Clean, minimalist and modern.

The GRW coffee maker measures 16 x 19.25 x 14.5 in and also weighs 8 pounds. Buy this instead of a BUNN NHS Velocity Brew. If you want to customer reviews on Amazon you can follow this link.

The BUNN Velocity coffee makers are all very good. They make excellent coffee. BUt, other than a brew time that is shorter by one minute, we think the Speed Brew line is the better choice.

Like other good machines, all these BUNN coffee makers agitate the grounds and keeps them floating which is faster and leads to better flavor.

Every BUNN has a multi-head spray head which hits the grounds with more streams of hot water simultaneously. Again, this is faster and agitates the coffee grounds.

Want a second opinion on the Velocity BX-D? Follow this link to the Amazon reviews and read what customers thought.

Although we recommend the Speed Brew models instead, if you are considering a BUNN GRB Velocity then follow this link for the best deals and customer reviews.

The CSB3T thermal carafe keeps your coffee mark longer. Also, the Speed Brew flavor is worth the extra one minute it takes to brew vs a Velocity coffee maker.

It has the advantages of the Speed Brew line, it comes is a really nice grey and has none of the extras you don’t want to pay for.

Like the other Speed Brew models, the BUNN-O-MATIC CSB1, brews a pot of coffee in 4 minutes. Like the Velocity Brew it does this by continuously heating the water until you are ready to use it.

The BUNN-O-MATIC CSB1 coffee flavor is the same as the other Speed Brew coffee makers.

The BUNN Speed Brew has a 70oz water tank and heats the water to 200 degrees and continuously heats it to that level so it. This is the same approach as the Zojirushi coffee maker. The BUNN Speed Brew brews the coffee faster. The water is exposed to the grounds longer in the in the Zojirushi. So, the BUNN coffee makers produce a milder, less caffeinated brew with lower amounts of solid particles. This also reduces chance of a bitter coffee.

The BUNN Heat and Brew uses the same basic brewing technology as the other BUNN coffee makers. It has a commercial quality heating tank and multi-spray head agitation. Their Heat and Release system manages is a temperature control that only releases the water when it hits 200 degrees. This prevents the water being too hot or not hot enough.

Because it is not heating your water all the time like the BUNN Speed Brew, it uses less power and takes longer to brew. It Brews 20 ounces of coffee in around 6 minutes and a 10 cups pot takes around 10 minutes.

The BUNN HB Heat and Brew is designed to be easy to use. The “pour-in bowl” feature has a water level indicator. It also has a unique “Drip-Free Carafe” that claims to be the most drip-free pour in the market. It does seem to be a great design.

The Zojirushi Coffee maker and Bonavita BV1900TS both also brew at 200 degrees, which is required for any SCA certified coffee maker.They are also great coffee makers so check out our reviews on those if you are undecided.

BUNN coffee makers use their own BUNN filters. You can buy a 100 pack of them here. They are ¼” taller than which they say increases the flow of water and prevents overflow of grounds. That may be true but it also means you need to find BUNN coffee filters. That means you may be out of luck running into your local convenience or drug store for filters.

All BUNN coffee makers are covered are covered by a full 3-year warranty. This is a much longer warranty than most other manufacturer warranties.