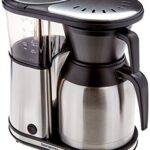 The Bonavita BV1900TS maintains a brew temperature within a few degrees of 200. This is becoming more common as we saw in our recent reviews of the BUNN Coffee maker line and the Zojirushi coffee maker.

This easy to use, somewhat unusually designed coffee maker has some features for real coffee fans

You can brew great coffee at 200 degrees Fahrenheit but how you agitate and soak the grounds and how long you brew makes a huge difference. Surprisingly, the pre-infusion mode is optional. Pre-infusions wets the coffee before brewing. It adds a small bit of time to the brewing but almost always leads to better, richer coffee. Presumably it is optional because some grounds could get bitter with the small, added exposure to water. But that seems unlikely. Some of the Amazon customer reviews mention adjusting pre-infusion to alter the strength of the coffee. This isn’t the purpose of pre-infusion. Just adjust the amount of water and coffee to make it stronger or weaker.

The Bonavita BV1900TS 8-cup coffee brewer takes 6 minutes to brew a pot. This is right between the Technivorm Moccamaster, Zojirushi or the BUNN Heat and Brew and the BUNN Velocity Brew (3 minutes) and the Bunn Speed Brew (4 minutes). Faster isn’t really better for brew quality. With all of brewing at similar temperatures, this leads to a big difference in the number of solid particles in the coffee and the flavor. The Bonavita BV1900TS is a great middle ground for me. A 6-minute brew will produce excellent coffee with nearly any coffee. Some of the really long and really short brew times won’t work well with every coffee.

The Bonavita BV1900TS thermal carafe is pretty good. It is a stainless steel-lined, double walled carafe. Under normal conditions this Bonavita coffee maker will keep your coffee hot for an hour or so. Not spectacular but ok.

Our Bonavita BV1900TS review rates it a “Buy.” It brews most coffee well, looks good, is made well for the price and is easy to use and to clean. The removable parts in the BV1900TS are all dishwasher safe and all the plastic is BPA-free. This Bonavita coffee maker measures 12.40″ x 6.80″ x 12.20.” In terms of brew flavor, this is a good middle ground that is less finicky than models with very high and very low brew times. We have seen better thermal carafes. The other models we mentioned include some examples of you can look at our Mr Coffee Thermal Coffee Maker list for more ideas.

Where to buy the Bonavita Coffee Maker

Our review found that the Bonavita BV1900TS Bed Bath and Beyond pricing was a little higher. Other retail stores and their online stores seemed to charge more too. We found the Bonavita coffee maker Amazon prices to be the best out there. Also, you get Prime shipping and returns with Amazon, in addition to the Bonita warranty